C Roger Bowen reflects on a school trip of his youth, and the preservation story of how one of the Severn ferries was saved from rotting in Ireland. 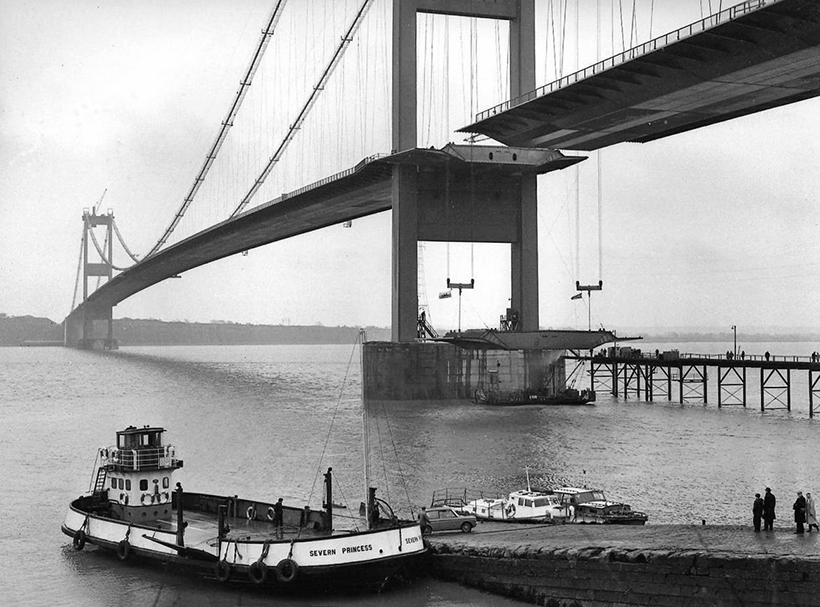 The Severn ferries: The last car disembarks from a Severn Princess ferry journey, while its replacement road bridge awaits the lifting of its final spans into place. (Pic: South Wales Argus)

“How much do we charge for a hearse, Mr Williams?” asked the ticket seller on the Severn Princess ferry. The smart reply was “Better make it the same as a large van but, if there’s an occupant in the rear, charge for an extra person”. Well, business is business!

The ferries – the Severn Princess, Severn King and Severn Queen – plied the lethally dangerous waters of the River Severn between Wales and England. The slipway at Beachley, near Chepstow, was adjacent to the confluence of the Rivers Wye and Severn, and the ferries ran to the Gloucestershire shore at Aust. For motorists, this service avoided a long road journey, and the Severn View Services on the M4 motorway now overlook the former route of the ferries. 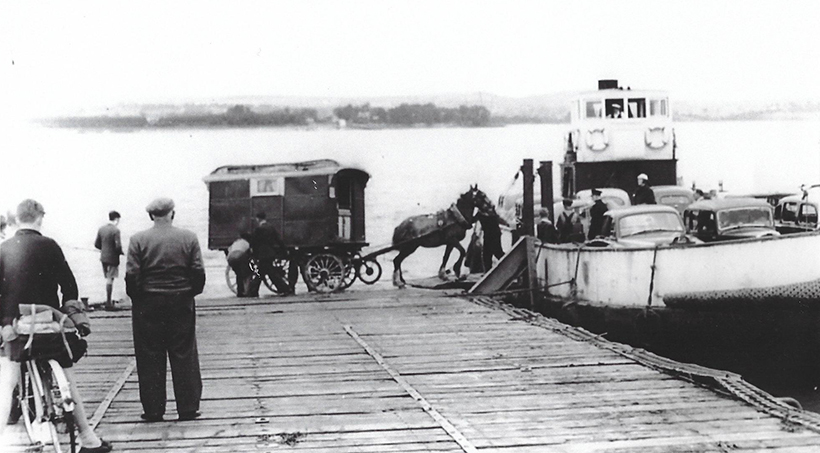 A horse-drawn caravan is loaded aboard Severn Princess.

Memorable school trip
My brief acquaintance with these rather eerie locations goes back to the summer of 1965. Children’s school treats today seem to consist of exotic study trips to far-flung locations in Europe and the United States. Not in my day; the single summer outing for South Wales’ Forgeside Junior and Mixed Infants, consisted of a day’s jaunt to Chepstow Castle, together with the incidental, added attraction of a two-way voyage on the Severn Princess ferry. But we loved it. Looking back, how lucky we were because, all too soon, the ferry would have been denied to us.

Shepherded on to the Severn Princess at Beachley, we cast off to pass under the yet to be finished Severn Bridge; its aerodynamically-shaped roadway had several final sections to be lifted into place to complete the essential road link between Welsh and English shores. Just 12 months later, the impressive suspension bridge was opened by HM The Queen, thus making the ferry surplus to requirements. 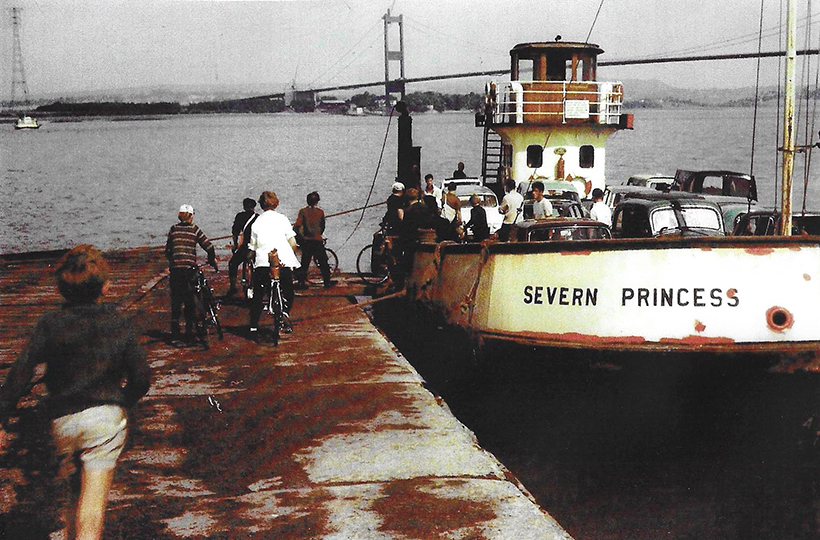 A group of cyclists about to board.

There was a Severn River crossing point here in Roman times, and probably even before then – the name Aust is probably a contraction of the name Augustus. It was that Emperor’s Second Legion (Legio Augusta Secunda) which spearheaded the colonisation of South Wales, subduing those unruly Celts who’d been making a proper nuisance of themselves to the invaders. The hazardous route was used subsequently by Cistercian monks from Tintern Abbey, on the River Wye.

Treacherous waters
The tidal range in this estuary, at around 40 feet, makes it the second largest in the world, after Canada’s Bay of Fundy, and currents can be treacherous here. In September, 1839, the ferry crew were all lost during a crossing of the Severn and, in March, 1844, tragedy again struck – this time claiming the life of James Whitchurch – son of the captain who died on the previous occasion.

Another serious incident on this stretch of river occurred 116 years later, on October 25, 1960, when two barges came together in thick fog and were carried, by the tide, into the pillar of the old Severn Railway Bridge. One of the barges, carrying petrol, exploded and five men perished in the tragedy. The Severn King ferry was despatched to assist with the demolition of the remainder of the bridge and, by a quirk of fate, became lodged on the stump of a bridge pillar. When the tide receded the vessel’s back was broken. 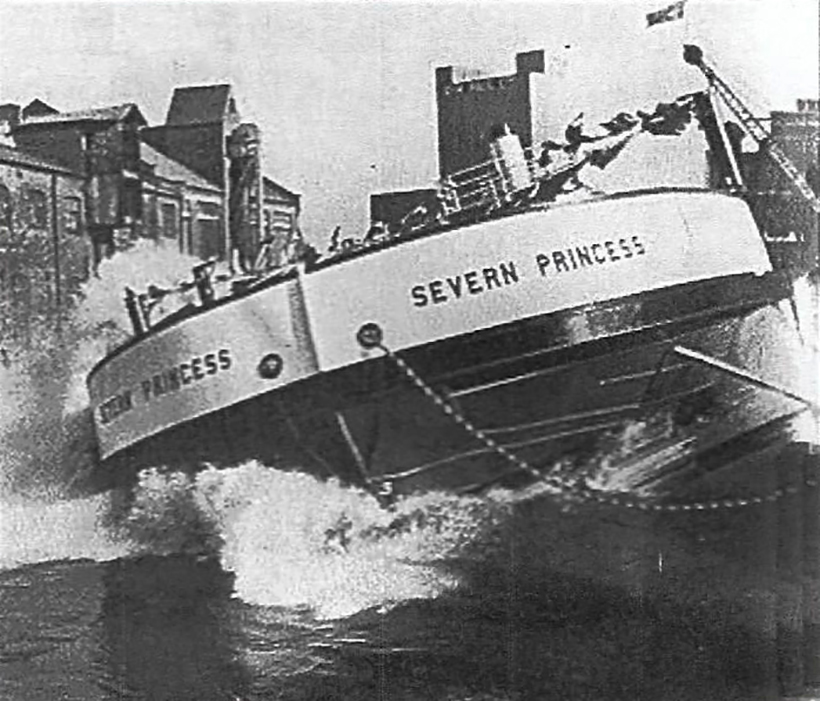 Severn Princess launching at Hull, in 1959.

Until the 1930s, car drivers wishing to get from Wales to Bristol and Gloucestershire, had to make a lengthy detour of almost 60 miles, via Gloucester. The original vehicle ferry, taking only passenger vehicles – no goods traffic – started in 1931. It was then that Enoch Williams founded the Old Passage Severn Ferry Co. 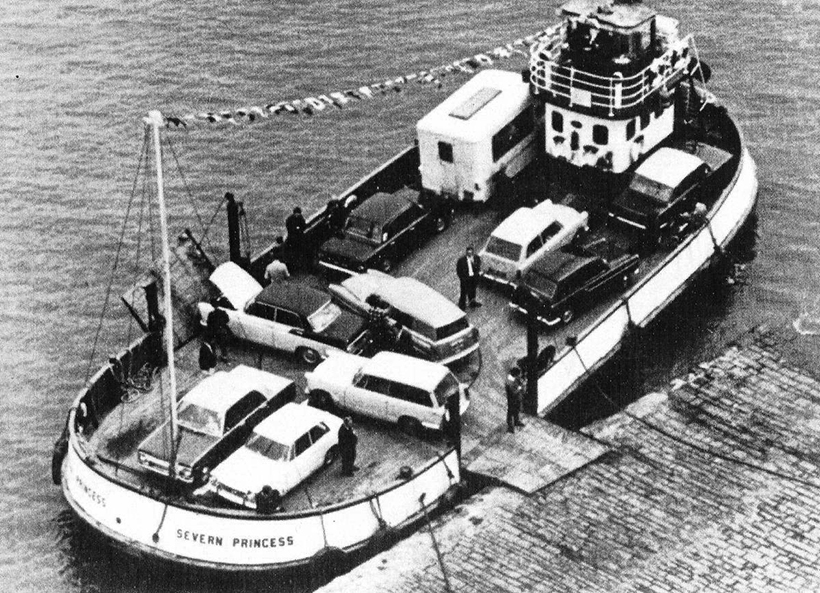 A car being turned on the central loading turntable. (Pic: South Wales Argus)

The later ferries had a broad beam, allowing up to 19 cars to be accommodated if parked judiciously. On arrival at the slipway, they were manoeuvred on to a central turntable on the boat, turned and parked. At journey’s end, they were turned towards the short exit link-span, for disembarkation. 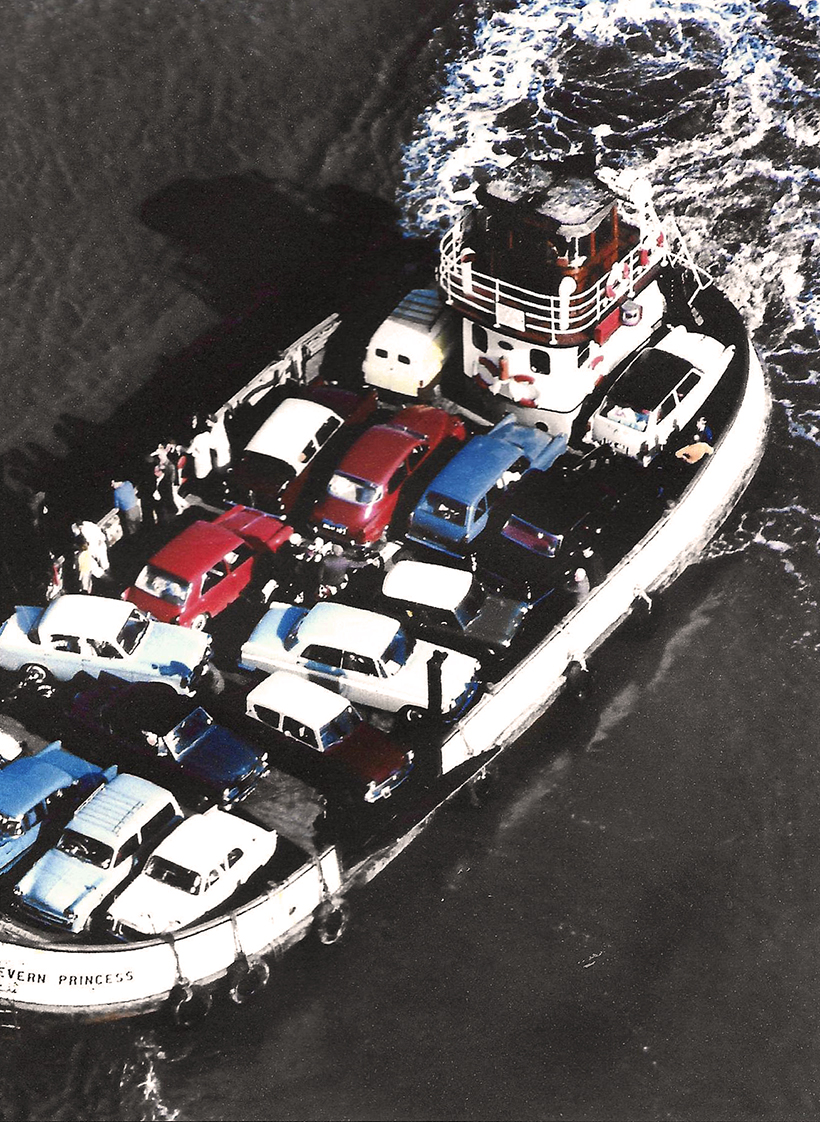 Severn Princess with 16 vehicles on board, as seen from the walkway of the Severn Bridge, then still under construction.

On busy days, with all three ferries operating, the company could provide a timetable of 20-minute frequency when conditions were favourable. The tide comes in with the speed of a galloping horse and the Severn narrows into a funnel shape above here. This characteristic causes the tidal wave known as the Severn Bore. Crossing the Severn Bridge by car today at low tide, you can marvel at the vast areas of jagged rock, and wonder at the challenge posed to the ferry operators in navigating the narrow channel.

Traffic flow
During the last full year of operation, the three ferries – Severn Princess, King and Queen –  carried over 500,000 vehicles; a testament to the skill of the crews having to negotiate the rather time-consuming loading and unloading procedure. In comparison, since the lifting of tolls on the Severn Bridge in 2019, this crossing point has been used by an average of over 50,000 vehicles per day. The last day of operation for the ferries was September 8, 1966, when Her Majesty the Queen opened the Severn Bridge accompanied by Transport Minister, Barbara Castle. 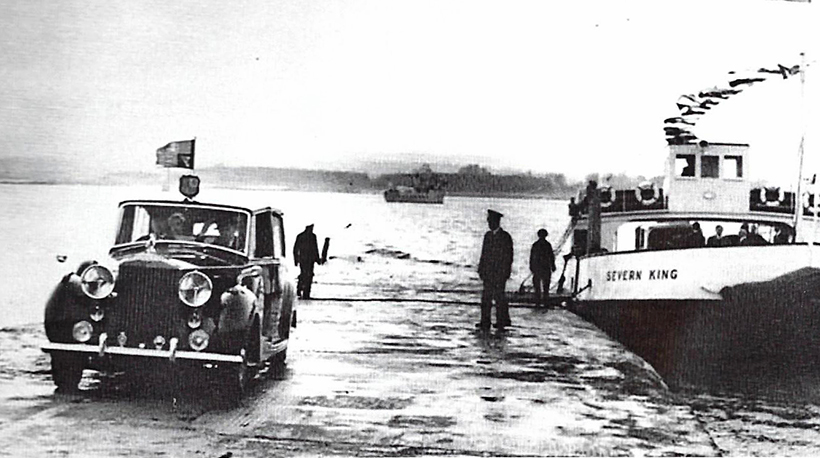 The ferries were popular among the locals they served, but clearly quite inadequate in the light of increased traffic levels.  Yet the vessels used were not forgotten, and it’s now 20 years since a group of dedicated volunteers from Chepstow brought the Severn Princess – the only remaining ferry – back from where she was discovered at her latter-day mooring in Galway, Southern Ireland. She’d been in use by a fishery, but had later been left to her fate. The Princess was discovered filled with fertiliser by Dr Richard Jones, grandson of ferry operator Enoch Williams.

The intrepid, would-be rescuers bought the Princess for the sum of one guinea (£1.05 in new money) and undertook an epic mission to return her to home waters. She was in a vandalised, rusty and unprepossessing condition, and the rescuers were under no illusion about the task they’d undertaken. With holes in the hull patched as well as possible, the Princess was taken under tow.

A fitting landmark
Tim Ryan, whose father was closely involved with the Severn Princess, told me that when found, she had more perforations than a colander. Large amounts of cement were poured into her hold to seal her sufficiently for the sea journey. After the five-day rescue voyage, during which she came close to sinking off Swansea, the Princess was brought alongside Beachley slipway. Ultimately, she was moved to the west bank of the River Wye at Chepstow, where she lies today under Isambard Kingdom Brunel’s imposing railway bridge. 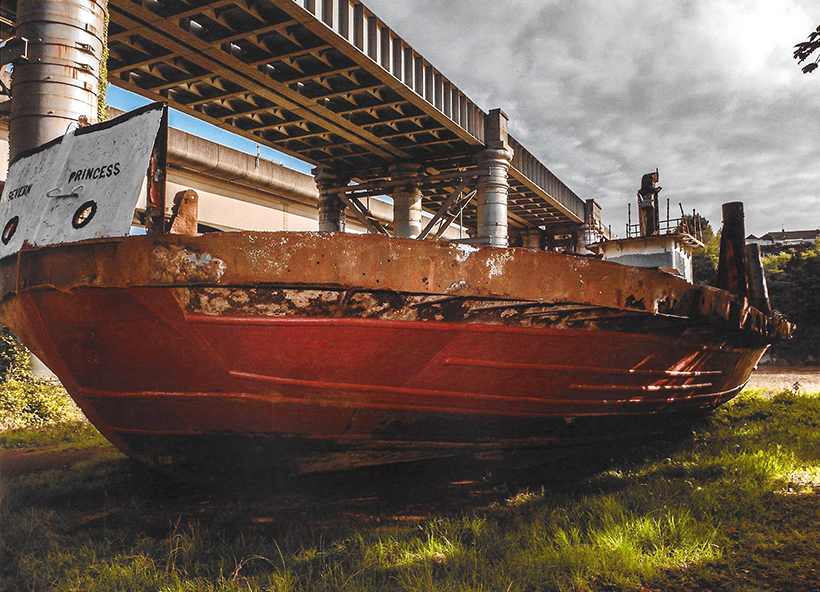 Severn Princess with Brunel’s 1852 tubular railway bridge in the background, at Chepstow. 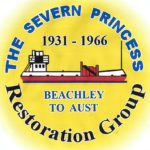 Restoration of the vessel began in earnest in 2014, with assistance from Mabey Bridge Ltd, which donated time, equipment and paint to help prevent further deterioration of the vessel. A marine surveyor called in to assess her condition was amazed that the Severn Princess had made it back to Wales from Ireland. He told Tim Ryan: “Frankly, if you’d shown me this vessel when she was brand new, I wouldn’t have passed her as seaworthy.”

The volunteers of the Severn Princess Preservation Trust are dedicated to bringing her back to a high standard as a land-based attraction. The area once occupied by the slipway is under development for new housing, but there are hopes that Barratt Homes may be able to provide space for the Severn Princess in its planned park within the estate.

Local affection
She retains a place in the affections of the local people, and it would be a fitting landmark at the end of the Wales Coastal Path. Ultimately, it’s hoped that there will be a viewing platform for visitors to inspect the vessel, and small numbers of people may be guided over the ferry on heritage open days. However, at the time of writing this, access to the vessel was not possible due to ongoing construction work in the area. 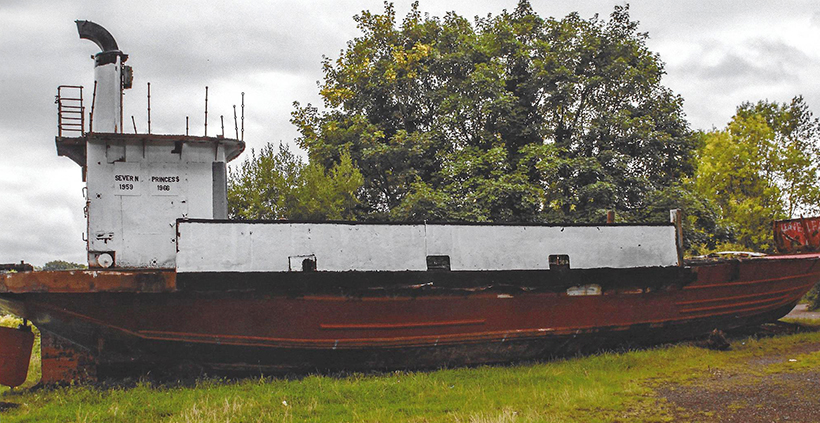 The volunteers of the Severn Princess Preservation Trust are dedicated to bringing her back to a high standard, as a land-based attraction.

The first road crossing of the Severn was proposed by Thomas Telford in 1824, to improve the mail coach service between London and Wales, but wasn’t supported by the government.  The original Severn Bridge wasn’t completed until 1966. With a main span of 988m and a tower height of 136m, it’s an impressive structure that was built under severe weather conditions. By the late 1970s the bridge was exhibiting structural weaknesses due to the higher than predicted traffic levels, and lane closures were needed to limit the load on the bridge.

The Severn Estuary is now spanned by both the Severn Bridge – a suspension bridge carrying the M48 Motorway which closely follows the old ferry route – and the Second Severn Crossing, now renamed the Prince of Wales Bridge further downstream, which was opened in June, 1996.

Severn Princess is now on dry land at Chepstow, alongside the River Wye. (Pic: Tim Ryan)

The latter is a cable-stayed structure which runs almost directly above the line of the Severn Tunnel, on the main railway line from London to Pembrokeshire. The new bridge has a total crossing length of over 5,100m, with 24 spans on the Gwent side and 25 on the Avon, and a main span of 456m.

When the first bridge was opened, the toll for cars was equivalent to 12.5p. Tolls on the bridges were abolished in 2019, by which time they’d risen to £5.60 for cars.

My thanks to Tim Ryan for his considerable assistance with this article. 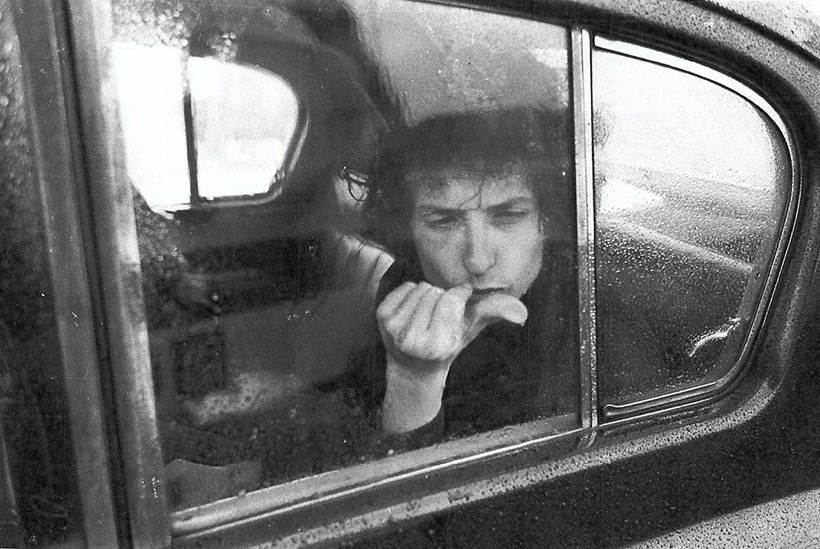 Bob Dylan, in none too good a mood, awaits the ferry at Aust. 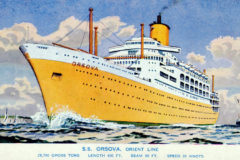 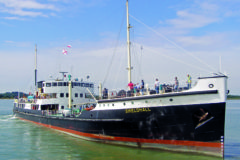