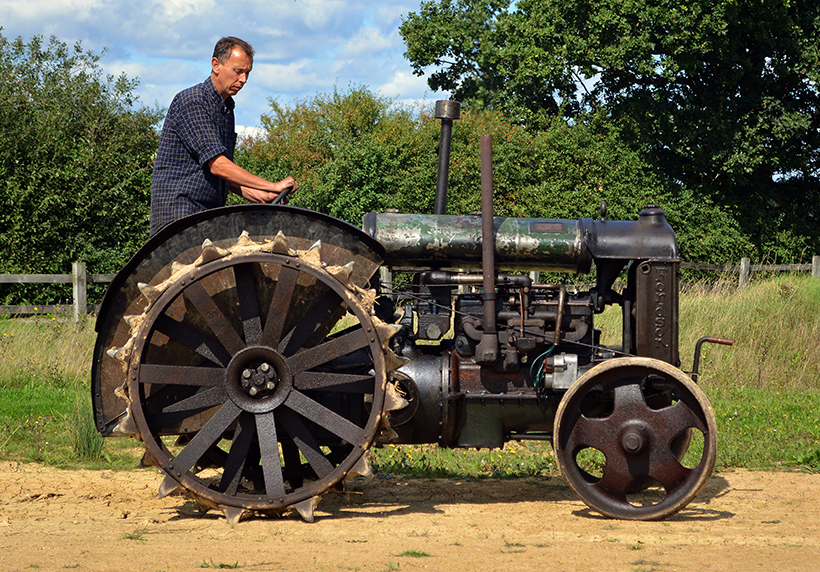 A beautiful childhood memory: Ian Stevens at the controls of his 1943 Fordson Standard N.

Ian Stevens has some very fine machines in his collection of restored tractors but it’s perhaps his 1943 Fordson Standard N which catches the eye most. At first glance, the tractor doesn’t appear to have been restored at all, and the Fordson looks as though it’s just been recovered from a field where it had lain, neglected and unloved, for the best part of 75 years.

However, it’s taken a great deal of time in the workshop to preserve this authentic, period look and, for Ian, it’s proved to be something of a labour of love because the tractor has strong family connections.

Old family friend
Ian explained: “This tractor has been owned by various members of my family since it joined us on the farm in Yalding, Kent, during the early 1950s. It wasn’t new then, of course, and the documents reveal that the petrol/TVO narrow wing Fordson was registered on July 30th, 1943, to the Dorset War Agricultural Committee, and was given the registration BFX 169. The original logbook shows a nil-stamped period between 1943 and 1948, with a Ministry of Fuel and Power stamp.

“However, details of its specific use during the war years and early 1950s are, as yet, unknown,” Ian adds. “So, if anyone recognises the original registration, I’d be pleased to hear from them. It seems likely that the Fordson was returned to Ford for an overhaul after the war and then, in 1953, it was sold to our family. There’s an entry in the log book confirming the sale, and recording a £2 fee stamped on October 20th, 1953.

“It also appears that the tractor was fitted with a Hesford winch, although whether this came with the tractor or was fitted after it had arrived in Kent, is unknown. The tractor gave good service on the farm, being used for general agricultural duties as well as working in the apple orchards. The Standard N was apparently ‘retired’ in the late 1960s, when a 1948 Fordson E27N was bought in 1967 and took over duties as the farm’s main tractor.” 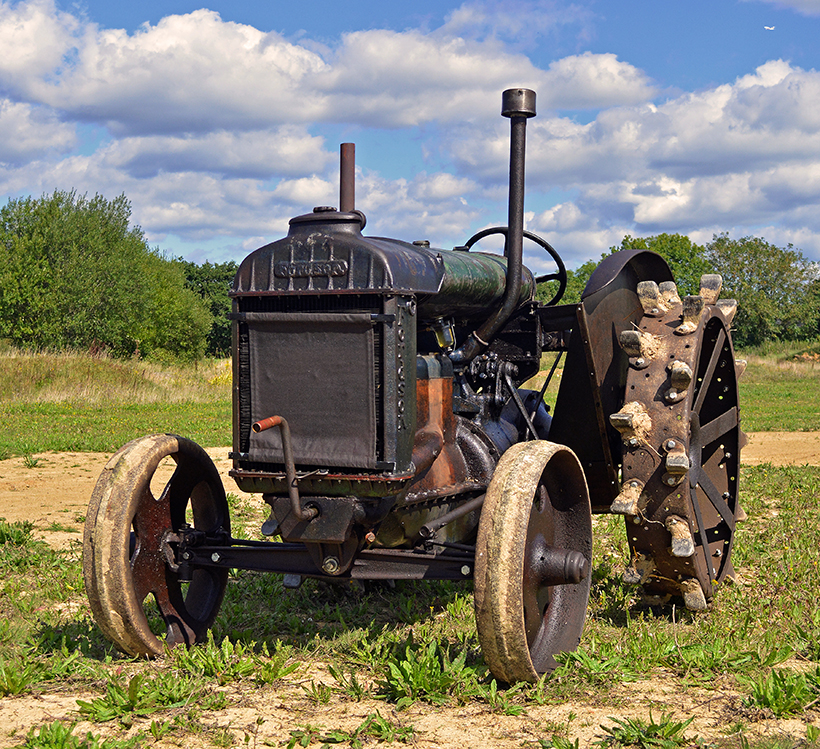 Apart from the engine, this tractor is largely original.

A childhood memory
The old Fordson was laid up for many years after that, and Ian has recollections of the tractor from when he was a boy. Fast-forward a few decades and he actually acquired the Fordson in 2002, believing that it would make an interesting restoration project. However, the years during which it had been left exposed to the elements had done the tractor no favours at all, and it was in very poor condition.

Ian recalled: “A first inspection revealed that the Standard N was a more likely candidate for the scrapyard, rather than a restoration workshop. There was a crack in the engine block, no doubt caused by frost, while the rest of the engine showed signs of hard use and was very worn. There were no shims left on the end caps, the white metal was worn away and almost every moving part of the engine was badly worn. Even the front set of steel wheels had nearly worn flat, so I was very obvious that this tractor had certainly worked hard for its living.”

The damaged engine could well have stalled the planned restoration there and then but, fortunately, Lady Luck played her part. Ian was carrying out some repair work on a customer’s tractor, and the conversation turned to Ian’s collection of classic tractors. When mention was made about the problem with the Standard, the customer took Ian down a muddy track, pointed to an engine in the hedgerow and asked: “Would this be any good to you?” Almost completely hidden among the undergrowth was an orange, Fordson Standard engine, which looked to be complete. But it was difficult to be sure about this because there was a tree growing through it! The replacement engine was recovered from a hedgerow, and came from an ‘orange’ Fordson Standard.

A lucky find
Ian went on to explain: “Despite the tree, the engine looked complete, and there were no cracks in the block. The chap told me that it was a very good engine and had come from Lambourne and Ridley, in Brighton. This firm had closed down years before, and the story goes that it had run two Standard Fordsons. Unfortunately, one of them had worm trouble and was scrapped, but the company hung on to the engine which had hardly been used.”

So, as you might imagine, finding a suitable engine really kick-started the Standard’s restoration project and, although it would be a ground-up rebuild, Ian had already decided that rather than attack the rust and dirt with a wire brush, he would carry out what could best be described as a sympathetic preservation, rather than a full restoration. His aim was to retain the patina on the machine that had been created slowly over the 70 or so years since the tractor had left the factory.

“Sadly, I wouldn’t be able to claim that the 1943 Standard would be original,” Ian added, “because I intended to fit a replacement engine. But, I was determined – as far as possible – to retain as much of the original tractor as I could. I was also adamant that, once whatever work needed had been done, I wasn’t going to apply fresh paint. It was clear that the machine had been repainted a couple of times during its working days and, on the bonnet, there were still traces of the painted registration number. Details like this simply had to be retained, so that the overall appearance would speak of those far off wartime years when the tractor would have been operated by hard-working Land Girls.” 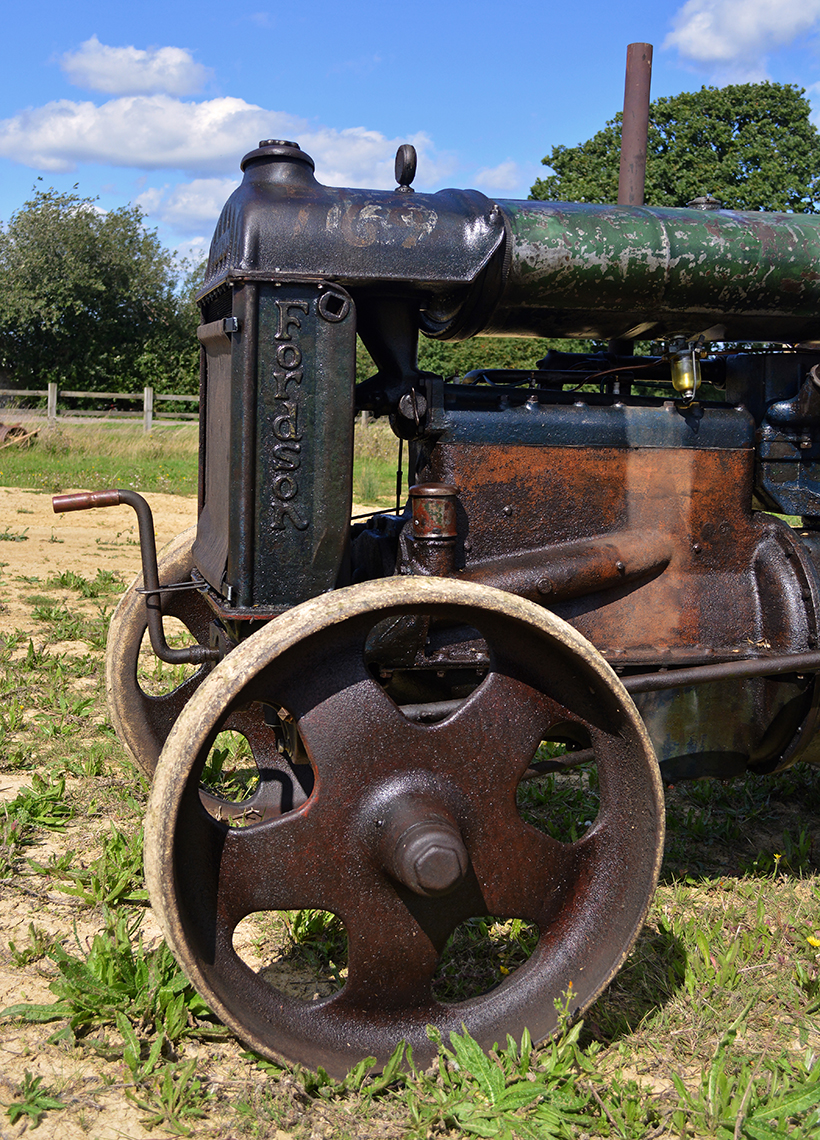 The original front wheels on this 1943 Fordson have been worn smooth; a graphic illustration of the hard, working life it’s endured.

Internal matters
Ian continued: “As it turned out, the replacement engine was found to be in excellent condition, apart from a problem with stuck pistons. Once the cylinder head and sump had been removed, Ian discovered that the pistons were actually 60thou oversize. There was also a full set of big end/crankshaft shims, loads of white metal and a set of valves that had been protected by thick engine oil. The whole unit was carefully stripped and the pistons were removed without too much difficulty. The core plugs were also taken out, after which the block was steam-cleaned to remove all the traces of dirt and oil.”

By this time, Ian had already stripped down the rest of the tractor, and the Hesford winch had been removed. The gearbox, clutch, front and rear axles were also removed and thoroughly steam-cleaned. For a tractor which had lain neglected for so long, most of the parts were found to be in very good condition. Consequently, the gears, worm drive and axle bearings were all good enough to be reused.

“I started the rebuild of the gearbox, paying special attention to the worm drive and the gearbox bearings; I was determined that this Fordson wouldn’t have a ‘whine’ while working,” Ian told me. “After fitting new gaskets and shimming-up some of the bearings, the back end of the tractor was reassembled and I was then able to turn my attention to the clutch.” Here, though, the news wasn’t quite so good, as scoring was found on the plates, and the bevel plates were flat.

Ian constructed a jig and re-bent the plates in a press to the correct bevel. New flat plates were acquired, and the clutch rebuilt. He also overhauled the steering box, air filter and water pump, after which the radiator was thoroughly cleaned. The latter was also in reasonable condition, and only required some minor soldered repairs to some of the cores. 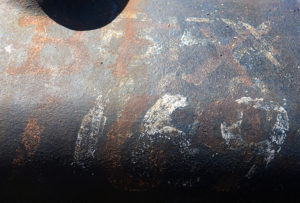 There are still traces of the original, painted registration number, which Alan took great care to preserve.

Leaking tank
The TVO tank presented a few problems as it leaked rather badly, although Ian put this right with a good deal of careful soldering. The glass bowl and taps were cleaned and Ian fitted new O-rings. Other jobs included making and fitting new bushes and pins for the front axle, carefully checking the wheel bearings and reassembling the front axle.

Having recovered and overhauled the second engine, work on its rebuild began. The crankshaft and pistons were refitted, and new piston rings had been sourced from Cox and Turner. The valves were reground and fitted along with the camshaft followers and new springs. Ian also fitted new rope seals, a new copper head gasket and refitted the flywheel.

“I turned the clutch bolts 90° to present a flat side so the clutch would not catch, and also overhauled the governor; sorting out the pip weights and dealing with the wear on the shaft. I was pleased with the progress of the project; the work had been flowing along very nicely, with no major problems being encountered to cause any real concerns. The tractor was coming together well. The engine was back in, as was the radiator, water pump, new fan belt, fuel tank, the rebuilt magneto, new fuel pipes, overhauled carburettor and manifold.” The magneto had been sent away to be overhauled, and Ian was delighted with the results – the rejuvenated unit provided a much-improved pulse and spark. New plugs and leads were fitted, together with a rebuilt governor. 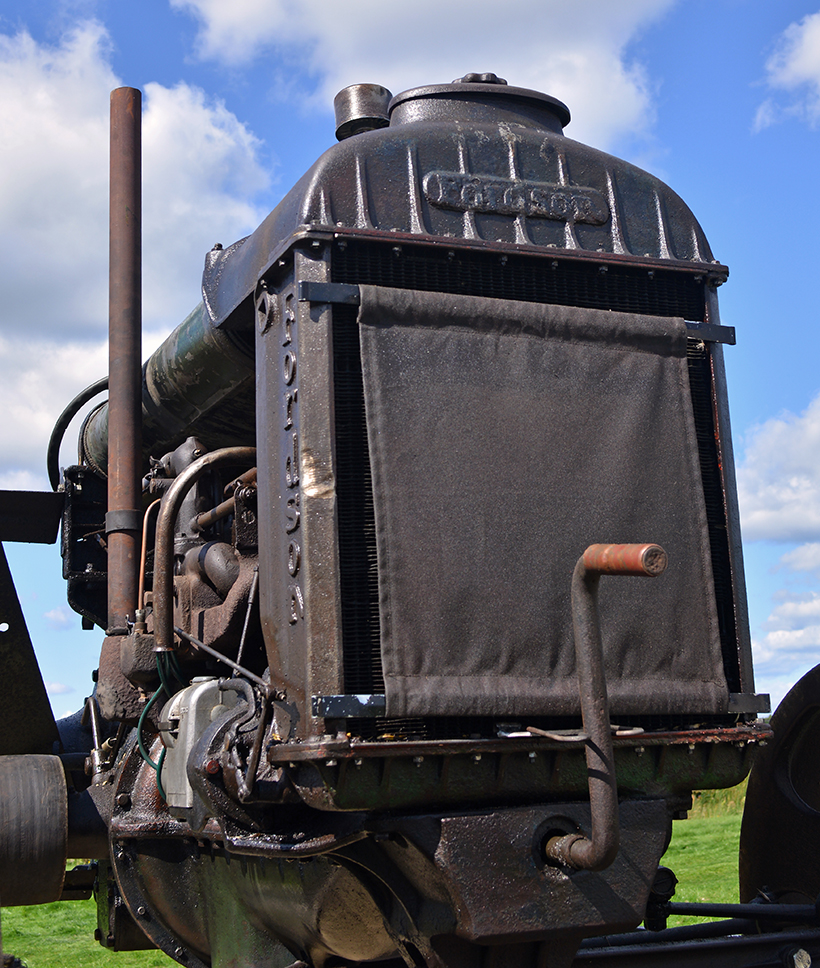 The radiator needed soldered repairs to some of the cores to deal with fluid leaks.

Running again
With fresh oil in the engine and rear axle, the water pump greased and the radiator full of water, petrol was poured into the tank for the engine’s first test run. It was turned over for a while to lubricate the bearings then, with the fuel switched on, the throttle half out and full choke, it took only a few pulls before the tractor burst into smokey life! The smoke gradually cleared and Ian was delighted to find the rebuilt engine running smoothly, with no signs of oil or coolant leaks.

The sump bolts were re-tightened to give the crank seal a chance to bed in, the gears and clutch were checked for clearance, the rear wheels fitted and Ian was then able to take the Fordson for its first test run around the yard. All was well and, with the tractor now most definitely a ‘runner’, the remaining jobs to be done centred on the bodywork. 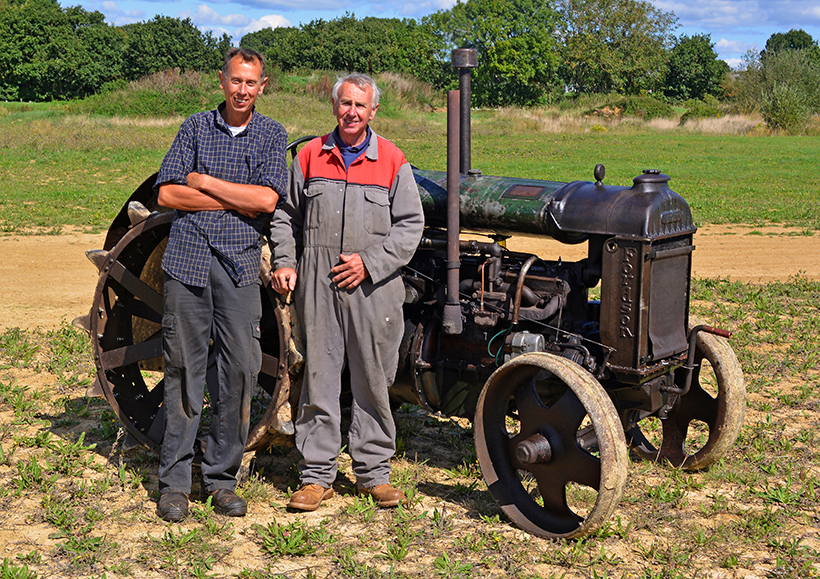 Ian and his father with the 1943 Standard, which the Stevens family bought in 1953 for use on its Kentish farm.

The mudguards were suffering with a nasty case of tin worm and, sadly, really were beyond saving. But Ian concluded that the arches and side supports were in good enough condition to be used again. Old rivets were drilled out and the patches of rust cut away and new metal was cut and fitted to the original parts using hot rivets. The original footsteps couldn’t be repaired but Ian managed to take a pair from another tractor and fit those instead.

That completed the job and, with its faded paintwork and steel wheels, Ian Stevens’ Fordson now represents a fine example of the essence of a ‘sympathetic preservation’, which is exactly what he set out to achieve. 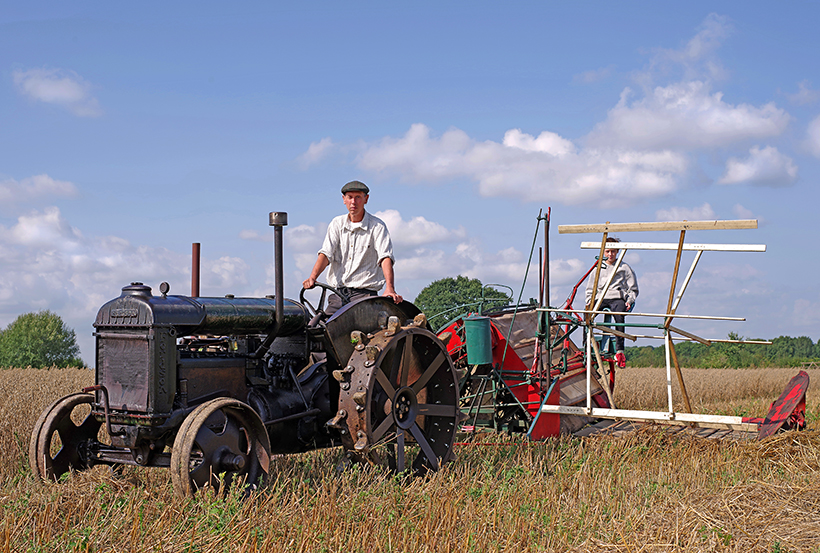 Ian and his young son at work with the Fordson, captured in a photograph that has a real period feel about it! 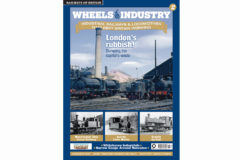 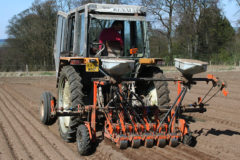