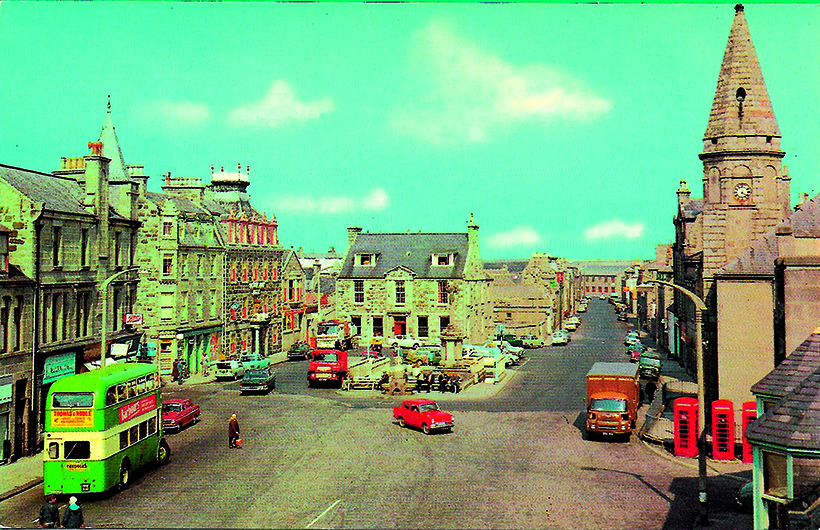 Classic UK postcard collection: A busy scene in The Square, Fraserburgh. This 1960s view of the centre of this town in north-east Scotland features a double-deck bus from the fleet of Simpson of Rosehearty, four miles to the west. This independent operator held out for many years against Scottish Bus Group area company, Alexander Northern, and still runs coaches. There is also a BMC FG box van to the right, a LAD-cabbed Dodge 300 series flat by the benches where the old men are sitting – one of them could have been my Great Uncle – and, in the corner, an ERF LV-cabbed dray of Scottish & Newcastle delivering to the hotel. Cars include a Ford Anglia 105E, a Zodiac Mk 3, Vauxhall Victor VX4/90, a Mini Pick-up and there’s also a BMC J4 van. 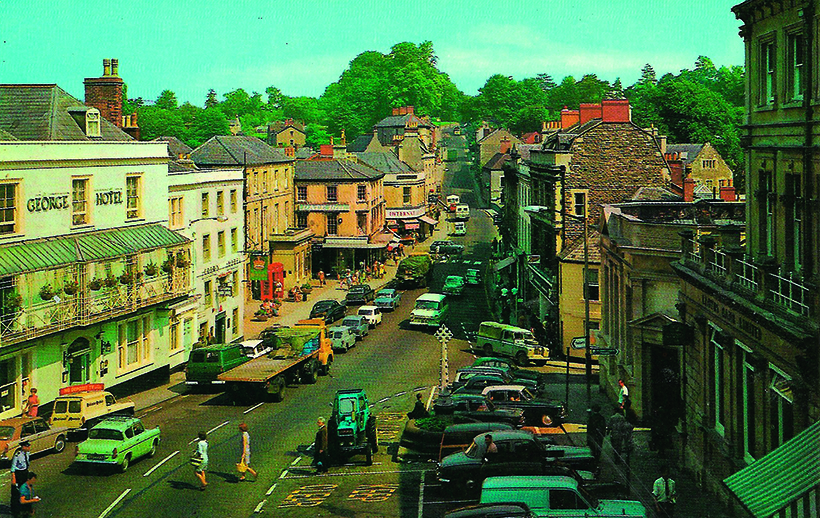 Another busy scene in the Market Square, Frome, in Somerset. There was a lot of through traffic, including two lorries, with a yellow BMC FFK artic nearest. There are plenty of parked cars and vans, plus a Ford tractor in the ‘Keep Clear’ area. Two Ford Transits date the picture to the late 1960s, with an Anglia van on the left advertising ‘No Deposit TV Rental’ on a roof-board. 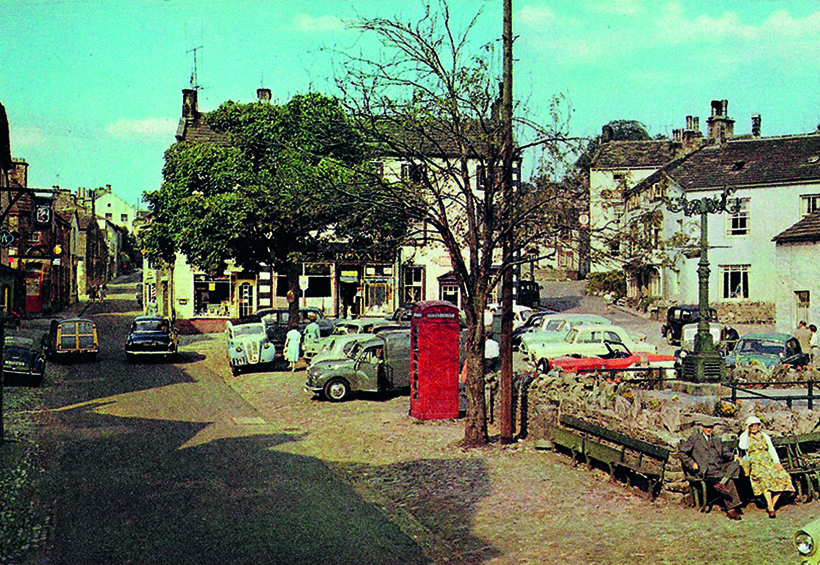 This postcard shows The Square, Grassington, in Yorkshire, with the cobbled market place in the centre of Wharfedale. The vehicles suggest the photo was taken around 1960, with a Morris Minor convertible, Traveller and van, and earlier Morris Z van, Vauxhall Velox, plus a glimpse of a Austin Metropolitan convertible with the hood down with the other cars beyond the telephone box. An interesting point is the number of these seen in these views – not something we see so often today… 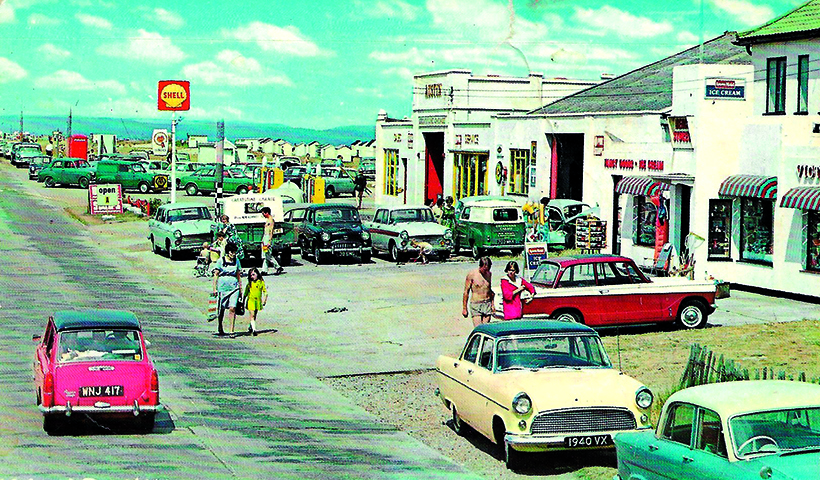 A slightly unusual postcard, showing The Parade, Greatstone-on-Sea, near New Romney in Kent. Central in this early 1960s view is the garage, an Austin dealership, with its Gypsy pick-up and A30/35 van parked outside, with two A60 Cambridge saloons, an older A50 in the middle and a VW Beetle with door and bonnet open. Nearer the camera, a 1960 Southend-registered Austin A40 ‘Farina’, WNJ 417, passes a Standard Vanguard, Ford Consul, 1940 VX (Essex, 1960), and a Triumph Herald, outside the souvenir shop. Further back, beyond the ‘Shell’ sign, lots of cars are parked in a random-looking way, with beach huts in the distance. 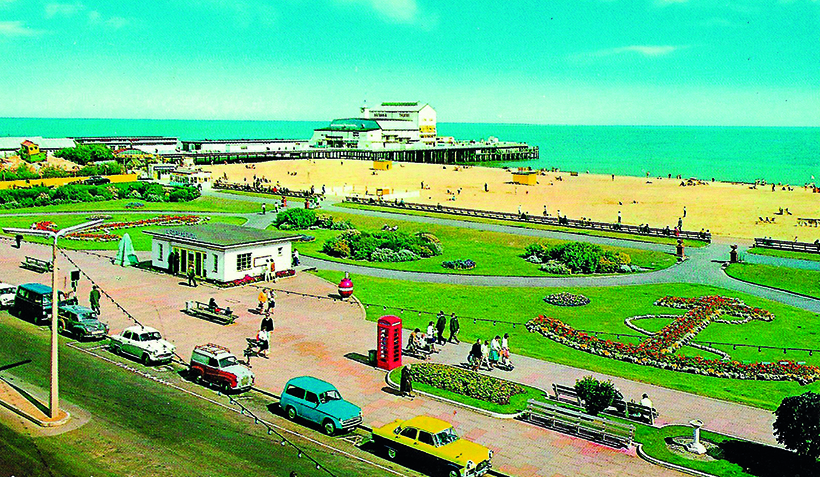 A view of the Anchor Gardens and Britannia Pier in Great Yarmouth, showing a high level of municipal pride. The colours of the parked cars haven’t been as carefully enhanced as the flowers, with a rather garish yellow on the Ford Zodiac Mk II and bright blue on the Hillman Husky. But the Austin A30 van and A55 saloon, Morris Traveller, Ford 400E minibus and Mini don’t look so bad. 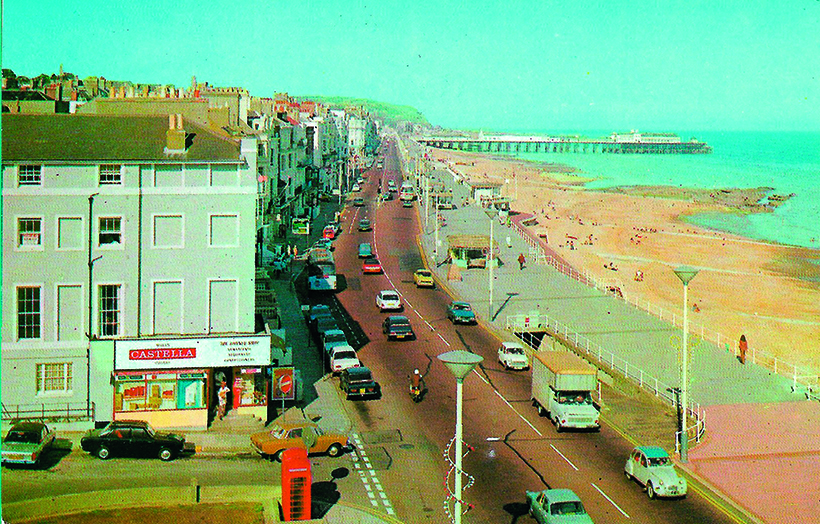 This view is described as: Hastings and St Leonards from Marine Court. We can see the pier in the distance, along the seafront, past The Corner Shop, advertising Castella cigars, which wouldn’t be allowed now. The card is postmarked 1997, but appears to date from earlier; there are two 1960s Plaxton coaches, a Ford Transit, a Luton van from the early 1970s, a Citroen 2CV, a Ford Escort Mk I, a Mini, a Lada saloon and a Fiat 124 on which it was based, a Ford Cortina Mk II, a Corsair, a Rover 2000 and an Austin Maxi. 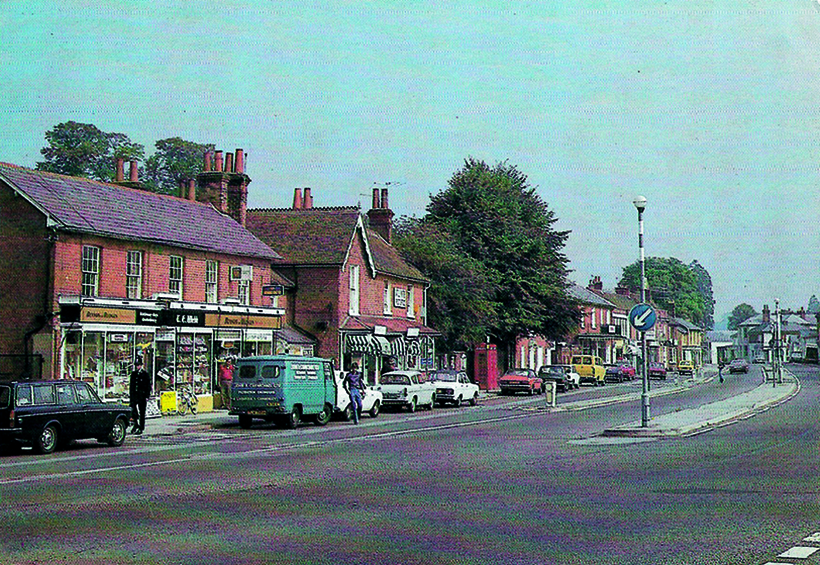 The High Street, Hartley Wintney, in Hampshire, looks peaceful in this 1970’s view. The traffic to Southampton and beyond on the A30 passing through was, by then, diverted away onto the M3 motorway. The policeman strolls past a Volvo 144 estate, having passed a BMC J4 van, a Ford Escort van, an Anglia, an Escort plus a Capri, an Austin Maxi, a Triumph 2000 and a Transit minibus, among the parked cars. 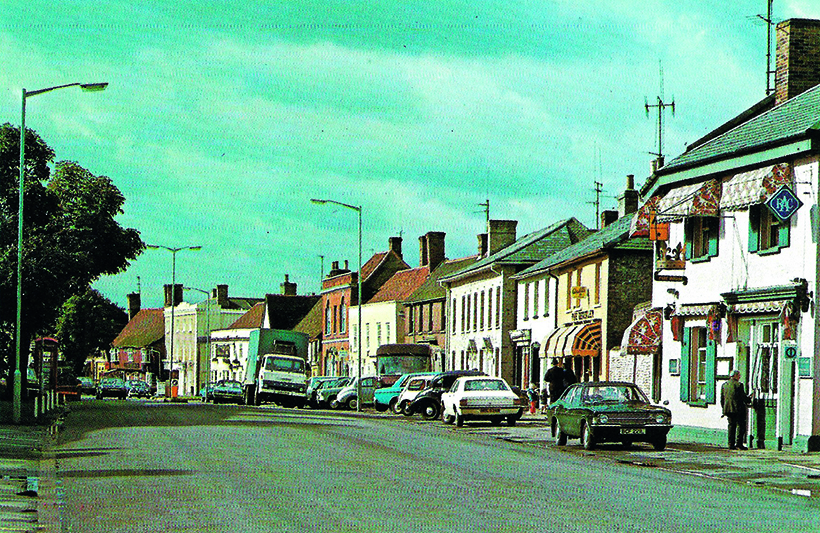 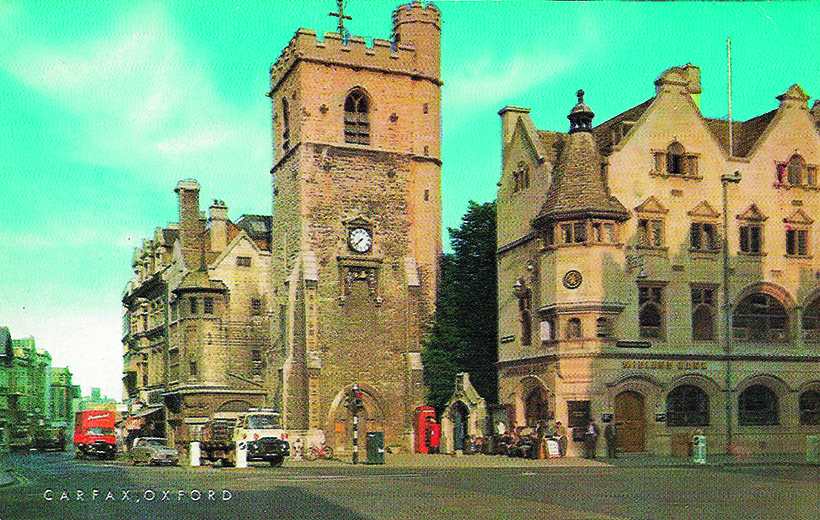 A 1960s city centre scene, Carfax in Oxford. Considered to be the centre of the city, Carfax is at the junction of St Aldate’s, Cornmarket Street, Queen Street and the High Street. The name means ‘crossroads’. We can see St. Martin’s Tower, the remaining part of the City Church of St Martin of Tours, a prominent landmark, which was being passed by a BMC FFK dray of Ind Coope, advertising Double Diamond on the headboard, an Austin A50 car and another FFK box van of Dewhurst the Butcher – once a common sight. 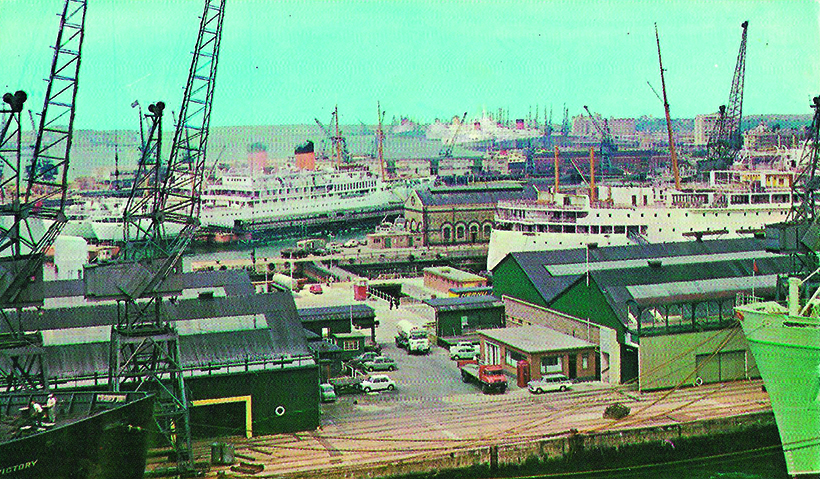 Something different – Southampton Docks – with a number of liners at the quaysides. Vehicular interest is provided by a platform-bodied Thames Trader and a LAD-cabbed Albion ‘Calor Gas’ tanker, while the parked cars include a Vauxhall Victor estate, an Austin A35, an 1100 and Mini pick-up with a tilt. 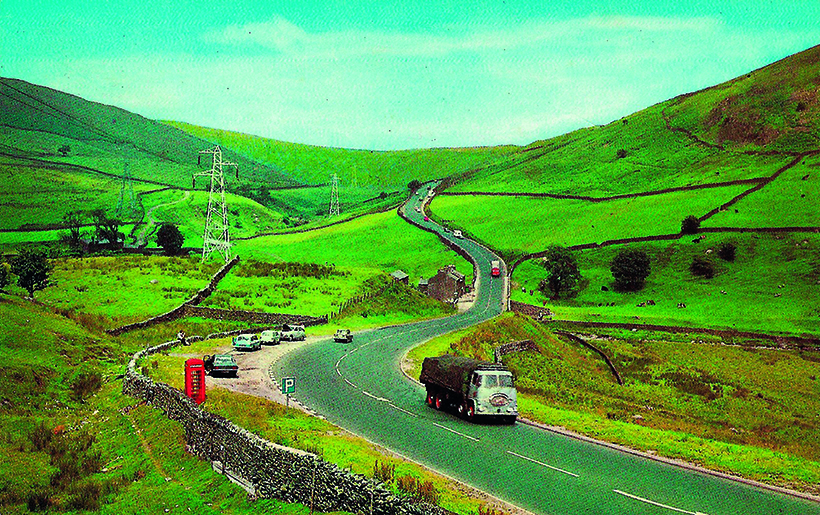 A wonderful scene! The message on the back is dated 1970, and the image shows Shap Fell. The A6 snakes off into the distance with a smattering of traffic, including a large van and a car towing a caravan. In the foreground, a KV-cabbed ERF eight-wheeler has just passed a lay-by with a late model Vauxhall Victor, Ford Cortina Mk I estate, a Mini van and an Austin A40 Somerset with the bonnet open plus a Triumph Herald passing. 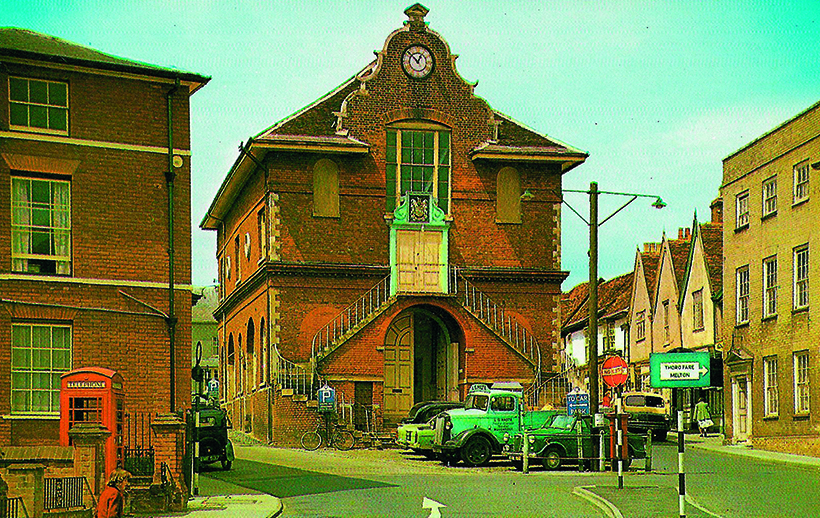 The Shire Hall in Woodbridge, in Suffolk, is the subject of this view. The main A12 road by-passes this peaceful town. The sign says ‘Thorofare Melton’, showing the way to the next village. Parked vehicles to be seen include a pre-war Austin 7, a Wolseley 1500, a Morris LC dropside lorry, a Vauxhall Cresta PA and a Bedford CA van. 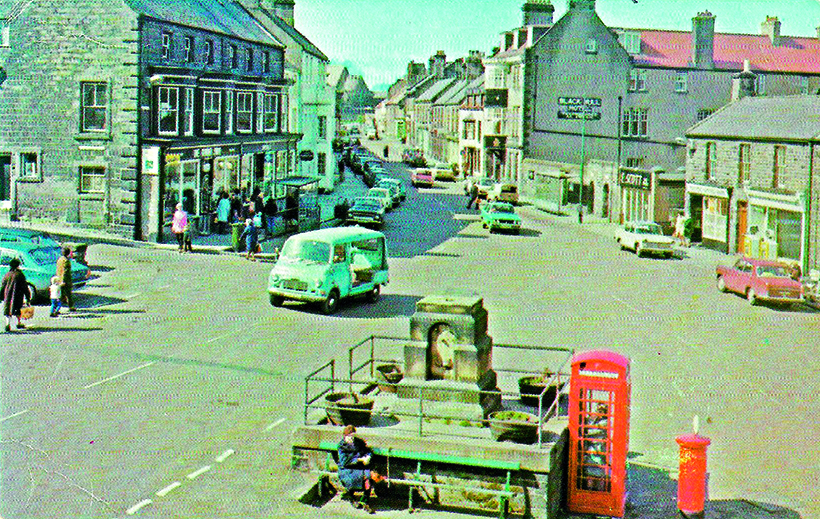 Here we see the High Street, Wooler, in Northumberland. The photo was most likely taken in the 1970s, although the postmark is 1989. Central we can see a BMC JU250, with the sides cut away as a milk float or similar. There are plenty of people about among the cars, which include a Morris Marina, a Ford Zephyr 4, a Hillman Avenger, a Hillman Super Minx and an Austin A60. 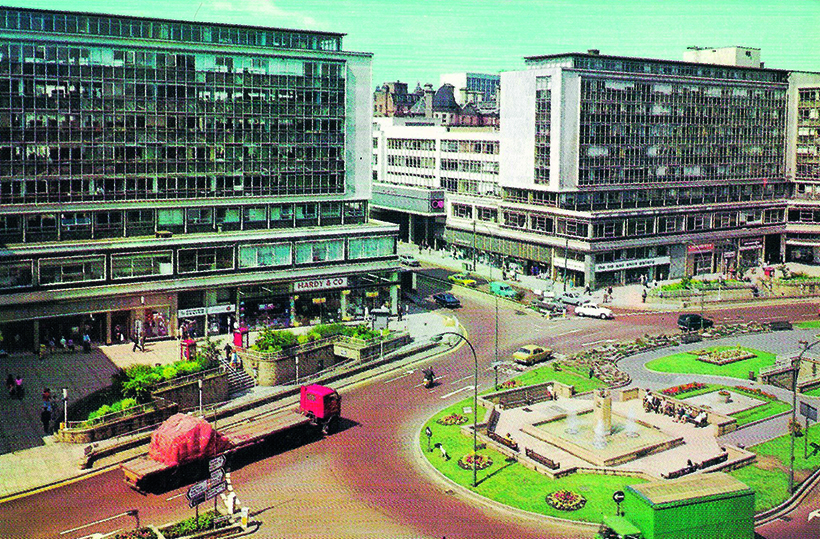 Modern buildings form the backdrop to this 1970s view of Forster Square in Bradford, with its ornamental gardens. The traffic was light, but included what looks like a Leyland Terrier box van and a Volvo F88 artic, with a part-load sheet over the tandem bogie of its flat trailer. Other vehicles include a Morris Marina, a Viva and a Morris 1000 van. 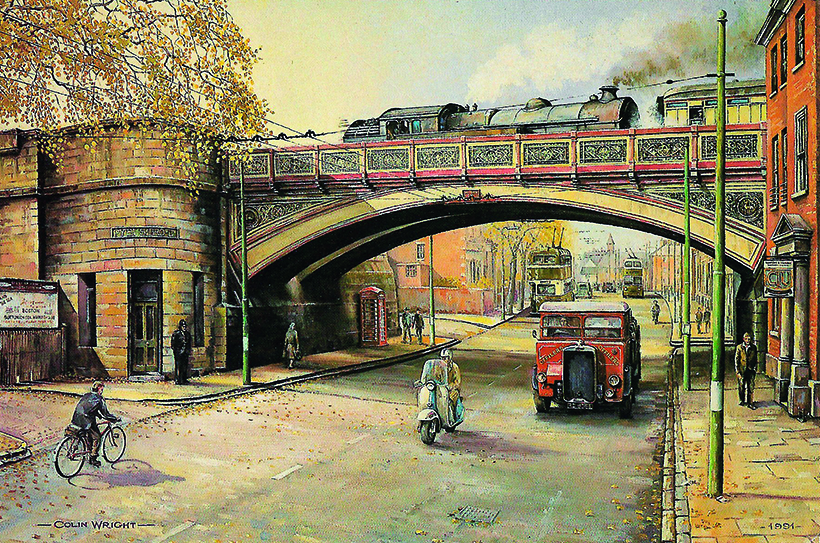 This is a card from the ‘Nostalgic Artist Series’, featuring a painting by Colin Wright of Friargate, in Derby, around 1958. There’s a Lambretta scooter overtaking an early post-war Leyland ‘Interim’ Beaver of Offilers Ales, with corporation trolleybuses beyond the bridge, over which what looks like an ex-LNER L1 tank is pulling a Gresley brake-end coach… 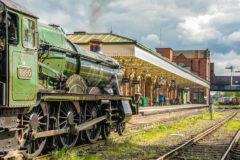 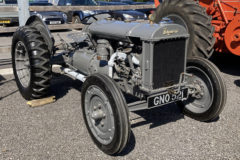